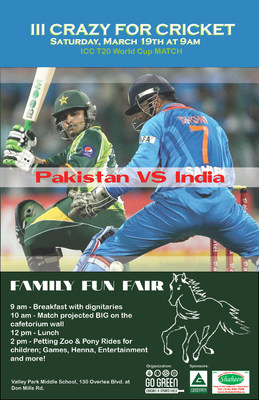 On Saturday, March 19, Thorncliffe Park and Flemingdon Park families gathered to celebrate (with another two billion fans worldwide!) the arch rivalry between the national cricket teams of India and Pakistan in the 2016 International Cricket Council (ICC) T20 World Cup, thanks to the Crazy for Cricket event proudly sponsored in part by Greenwin.

"We are very excited to watch this match and cheer for Pakistan," said Ifthikhar Safi, head youth coach for the Go Green Cricket & Sports Field, the not-for-profit organization hosting what is becoming a particularly special, memorable and riveting neighbourhood event. "India is a strong team and we know it will be fun to watch."

The majority of Thorncliffe Park and Flemingdon Park families are of South Asian origin with roughly one-third of the new immigrant community hailing from either India or Pakistan. The rivalry between the two countries' cricket teams is legendary and goes back to the two countries first One Day International (ODI) match in 1978. Most recently, the match itself was moved by the ICC from Dharamsala, India to Kolkata to ensure greater security for the Pakistani team.

This is the third Crazy for Cricket event held by Go Green in the past five years, with the first celebrating the ICC World Cup finals between India and Sri Lanka in 2011. This particular T20 event starts at 9:00 am for breakfast when the game will be projected in HD on the back of the Valley Park Middle School cafetorium wall at 130 Overlea Blvd.

Formal speeches will also begin at 9:00 am and dignitaries will include DVW MP Rob Oliphant and the Pakistan Consul General- Toronto Asghar Ali Golo. Ongoing festivities will also include a light lunch while families will be treated to sports and entertainment in the gym and pony rides and a petting zoo outdoors.

"This event is a favorite for me," observed Nick Stefanoff, former VPMS principal and Co-chair of the Go Green Cricket and Sports Field project. "It is always heartening to see families of such diverse backgrounds come together to cheer on their team in the spirit of friendship despite the arch rivalry that exists."

About the Go Green Cricket and Sports Field: