It All Started With Dreamers, Risk-Takers & Visionaries Who Transformed A Post-WWII Toronto

Since 1948, Greenwin has earned a reputation as one of Canada’s leading providers of rental apartments for all people. Today, we are among our country’s largest privately owned, full-service property management and development firms.

Greenwin invests in people and places to create exceptional, inclusive rental communities - one building at a time.

At our core, we’re not just about creating financial value. We look at each asset as our own. This fuels our ability to develop lasting relationships with stakeholders; decades-long partnerships that are based on transparency and trust.

Headquartered in Toronto, our company has a combined staff of over 500 dedicated employees. As the property manager for over $3.3 billion in real estate assets, Greenwin is known as a leader in multi-family housing, non-profit and affordable housing, social housing and commercial properties. Our portfolio spans across major urban centres in Central and Eastern Canada, including more than 1 million square feet of commercial space and 24,000 residential units; over 5,000 of which are affordable housing, non-profit housing and Toronto Community Housing units.

The roots of Greenwin stretch back to 1948, when the Greenwin Construction Company was first founded by Lipa Green and Arthur Weinstock to build single-family homes in Toronto.

In the early 1950s, at a time when more conventional experts did not share our confidence we emanated a public preference for apartment living— particularly close to the central area of the city.

Since 1978, we have transformed Toronto's skyline through our involvement in some of the city's most iconic properties, such as midtown's Castle Hill townhomes, The Ports condominiums at Yonge and St.Clair, and Queen's Park Place in the Bay Street corridor.

Throughout the 80s and 90s, we were instrumental in the development of many of Toronto's leading hospitals, including Mount Sinai Hospital, the Scarborough Hospital, the Princess Margaret Cancer Centre, the Wellesley Hospital, and North York General Hospital.

Today, in addition to providing best-in-class management, construction and development services, Greenwin has earned a reputation as an expert in repositioning under-performing properties.

A History Of Transforming Skylines

The roots of Greenwin stretch back to 1948, when the Greenwin Construction Company was first founded by Lipa Green and Arthur Weinstock to build single-family homes in Toronto. In the early 1950s, Greenwin began residential development in Don Mills - one of Toronto's first suburban satellite communities. From there, we began building multi-unit residential properties. In the 60s and 70s, we built more than 10,000 residential units, including single-family homes, condominiums, rental apartment complexes and affordable housing.

Since 1978, when the late Harold Green created our construction and development arm, we have transformed Toronto's skyline through our involvement in some of the City's most iconic properties, including midtown's Castle Hill townhomes, The Ports condominiums at Yonge and St. Clair, and Queen's Park Place in the Bay Street corridor.

Greenwin has been instrumental in the redevelopment and enhancement of many of Toronto's leading hospitals. These include Mount Sinai Hospital, Scarborough Hospital, Princess Margaret, the Wellesley Hospital, and North York General.

Greenwin is now in its fourth generation of family leadership, with a legacy spanning from the development and property management of mixed-use landmarks like the Yonge-Eglinton Centre and Greenwin Square, to the multi-residential neighbourhood of Yonge and Davisville and North America's first-ever master-planned community in Don Mills. We have developed and constructed 10,000+ purpose-built rental apartment suites, with an additional 5,000 suites in our development pipeline. Greenwin is among Canada’s top affordable housing providers and has built upwards of 4,000 affordable, purpose-built rental housing units. Partnerships include all three levels of government, Toronto Community Housing, and social agencies. 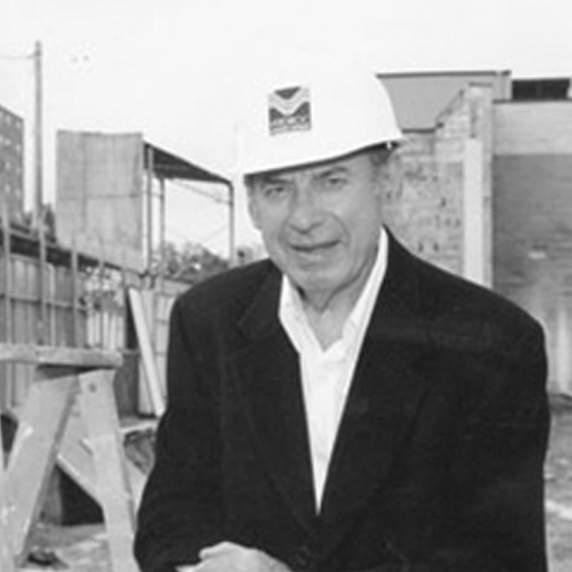 Harold Green was one of Canada's greatest builders – a man who dedicated his life to building a better community for his friends, family and many generations to come.

Harold first learned the construction trade as a teenage bricklayer building baking ovens in Toronto with his brothers Sam and Al. From there, he joined Greenwin Construction Company, established by his father, Lipa, and partner Arthur Weinstock. In the early 1950’s he had taken over Greenwin’s construction division, turning it into one of Toronto's largest residential builders and developers.

Innovator, disruptor and trendsetter, Harold was never afraid to adopt the latest industry practices. From being among the first to embrace mass-produced housing components in the 1950s, to implementing an unprecedented construction system called the "flying form” in the 1960s, Harold left an imprint on the construction industry that still stands today.

As strong as his passion for the industry was, his belief in putting people first was even stronger.

In 1967, he founded and was the first President of the Metro Toronto Apartment Builders Association. The Association forged the first collective agreement between workers, employers and the unions, establishing medical, dental, legal aid benefits and a pension plan for construction workers for the first time.

In 1998, Harold was inducted into the Greater Toronto Home Builders' Association Hall of Fame; a tribute to his ability to bring order and fairness in times of chaos. Harold was well-regarded as a tireless philanthropist who contributed to a myriad of causes in Toronto and around the globe. Although he typically shunned the spotlight for his charity work, he accepted a lifetime achievement award from the Mount Sinai Hospital in 1998, and he and his wife Miriam were awarded the Peace Prize from the Canada Israel Children's Centre that same year.

Harold Green passed on November 18, 2004, leaving behind a legacy of passion, innovation and humanitarianism. These same principles serve as the foundation for Greenwin today, guiding all those who operate under the Greenwin name.