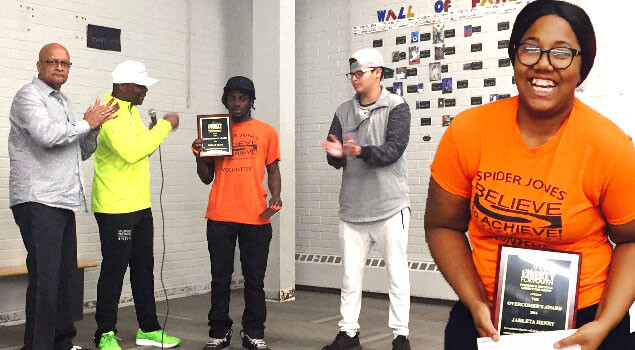 Our friends at the Believe to Achieve Organization have announced that Diquan Olive and Jahleta Henry have received Frederick Dryden's Perseverance Award and the Overcomer's Award from Liberty for Youth. Both winners are volunteers at Spider's Web Youth Drop-In Centre (located at our 160 Chalkfarm Drive rental property in Toronto). On behalf of all of us her at Greenwin, congratulations, Diquan and Jahleta!!!

Here's some info about the winners:

Jahleta Henry is a young, African-Canadian teenager, who has managed to overcome almost every obstacle that has been placed in her way. She was raised and currently lives in the Jane/Wilson area, in which all of the vices of life are regularly displayed, but infrequently avoided. Jahleta herself emerged with a very skewed sense of what her world ought to look like.

From a fairly early age, she was involved with many forms of petty crime and found herself squarely on the wrong side of the law. Without strong parenting and a feeling of belonging, she drifted in and out of trouble. It was through happenstance that she encountered the Believe to Achieve program and has made remarkable progress ever since.

Jahleta, a girl who could never be trusted to be anything but troublesome, is now an active and valuable member of the Believe to Achieve team. Although she continues to experience difficulties at home, she walks boldly into the Believe to Achieve centre and that is where her magic begins. Aside from trying to navigate a different way of relating to her community, Jahleta participates in every activity presented to her with a quick-witted temperament and a strong sense of pride.

She has become more than just a leader to the children she cares for; she is a big sister and a person upon whom they can rely to offer good advice. She is honest about her struggles with anger and identity, both of which were impediments to her natural maturation. She has fashioned herself into the kind of person that people listen to; she reflects a changing attitude about struggle and all that seems to follow it. She has exceeded all expectations and is now carefully planning her next successful chapter. Jahleta Henry has not only overcome the limitations of her background; she has surpassed them and brought dozens of children with her.

Diquan Olive is a prime example of "perseverance" in every sense of the word. He was raised in the Jane/Wilson area at a time when the neighbourhood consisted of working to upper-middle class residents and a small but devoted group of drug dealers, child traffickers and prostitutes. A vocally-repressed and shy young man, he was at the mercy of heartless, delinquent, neighbourhood boys, who presented a cohesive alternative to difficulties within his family. At some point during that time, he chose to become a member of a local neighbourhood gang because he believed that it would provide for him, peace of mind and what he deemed his own physical protection. Within a short period, Diquan became involved in a number of petty crimes, which would eventually bring him from the school room to the interrogation room. He had become all that he despised. A dramatic change in his life was needed and it would come from a very unexpected place.

Diquan began as a volunteer with the Believe to Achieve afterschool programme, where children from six years onwards are provided with the academic assistance, emotional stability and cultural enhancement necessary to develop in a healthy way. But his was not an easy integration. The children could not understand why he spoke so little and the youngest were more than disrespectful. Despite these new challenges, Diquan was learning a lot of new things: how to deal with people in an effective manner and how to negotiate a world in which there is very little room for you. Before long, he began the simple act of vocalizing his expectations and with that, began to resume his social maturation.

Diquan is now a young man, still of few words, who has become a valued employee of the Believe to Achieve team. He has managed to do what most people cannot: distance himself from his former acquaintances, while remaining a positive and active voice amongst his peers. It is his intention to return to school to complete his education and with that, he aspires to a life of normalcy and upward mobility. His life, though an amalgam of many stories, represents victory with every single success and obstacle overcome. Diquan has beaten all of the odds against him through his service and devotion to others, reminding us all how interconnected we are and that selfless actions are always rewarded.