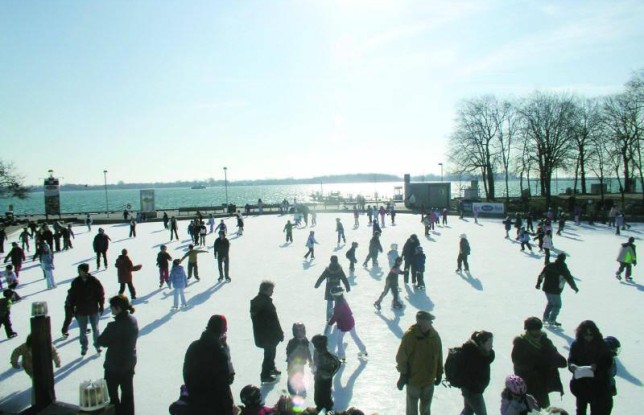 Our bank accounts are all still recovering from the holidays last month, but that doesn't mean the fun has to stop. Toronto.com has gathered nine things to do in Toronto that won't take your bank into overdraft. Check them out here:

SKATE: Pick a rink, any rink
Toronto's 50 city-run artificial outdoor rinks deliver more free skating surfaces than any other city on Earth. The variety is stunning, too: there's Nathan Phillips Square with its giant new "Toronto" sign, Etobicoke's winding Colonel Samuel Smith Park skateway, the versatile covered rink at Greenwood Park, and the list goes on. Throw in privately-operated surfaces such as the lakefront Natrel Rink at Harbourfront Centre and the pastoral Evergreen Brick Works ice pad, and maybe Hogtown should be re-nicknamed Skate City.
See a list of rinks here.

DINE: Prix-fixe meals, indie indulgences
Running January 29 to February 11, the annual Winterlicious discount dining extravaganza serves up prix-fixe lunch and dinner menus starting at just $18 at more than 200 restaurants across the GTA. Independent eateries also host their own thrifty events in winter. A standout example: The Depanneur's monthly "Table Talks" series of culinary salons, which include dinner, soup or salad and coffee or tea for $20.

LISTEN: Roots, blues, opera
The show must go on, as they say, even in the face of frightful weather.
The annual Winterfolk Music Festival, for instance, is celebrating its 14th edition with a range of ticketed and free all-ages roots and blues concerts at five venues along Danforth Avenue from February 12-14. Special tribute events, an awards ceremony and various themed musical workshops are also on tap. For something that's always free and runs throughout the winter, the Canadian Opera Company's free concert series runs until May (usually on Tuesdays and Thursdays), and features vocal, piano, jazz, dance, chamber and world music shows.

CHEER: Live hockey at Maple Leaf Gardens
Are you old enough to miss the days of $12 tickets for games at Maple Leaf Gardens? That kind of throwback pricing – more or less the cost of one beer at a Maple Leafs game today – is still available at Ryerson Rams home games. Until Feb. 18, the men's and women's teams will be taking on Canadian Inter-University Sport rivals in the Mattamy Athletic Centre, located inside the refurbished Maple Leaf Gardens.

GROOVE: NBA All Star Weekend
Tickets for the NBA All-Star Game on February 14 at the Air Canada Centre will probably cost more than $12 (ya think?), but rubbing shoulders with your pro hoops stars could actually cost less than that. Until January 11, Eventbrite is selling advance tickets to various All-Star Weekend "private club after-partys" for just $10. Check the website for location details as they emerge, as well as for ticket pricing and availability after January 11.

TOBOGGAN: Park slopes aplenty
Toronto isn't known as a skier's city, but as a toboggan town it shines. Snowy ravines, valleys and excavated sand pits provide grade-A slopes, as evidence by the calibre and popularity of sledding at Christie Pits, Trinity Bellwoods, High Park and Riverdale Park, among other GTA locations. City by-laws prohibit sledding in some parks, so check the signage before hurtling downhill. The cost: Nothing but a good leg burn.
Here are the best Places to Go Tobogganing in Toronto.

ADMIRE: Interior design, ice sculpture
The visual arts encompass many forms and settings this winter. Take the Toronto Design Offsite Festival: From January 18 to 24, public spaces across town will be turned into exhibition sites featuring window installations, guided (and blindfolded) walking tours, and more. Then there's the Bloor-Yorkville neighbourhood's annual IceFest, which on February 20 and 21 will showcase intricate ice sculptures and host an ice-carving contest.

LEARN: City museum events
Two City of Toronto museums go out of their way to embrace winter. On January 24, Todmorden Mills hosts a naturalist-led tour of its Wildflower Preserve. Learn how birds, animals and plants survive, and even thrive, in winter conditions, and then sip mulled cider afterwards for just $7.08 for adults, $4.42 for youths and seniors, and $3.76 for children. Over at Colborne Lodge in High Park, "Winter Fun Day" is being celebrated on January 17 with free taffy pulling, roasting marshmallows, throwback games and warm cider.

WATCH: Japanese film at Bloor Hot Docs Cinema
Getting out of the house for a movie is one thing. Getting out of the house for a free screening of a Japanese film classic is quite another. From January 10 to 24, the Bloor Hot Docs Cinema is hosting complimentary screenings of subtitled works such as The Floating Castle, Leaving on the 15th Spring and A Story of Yonosuke.